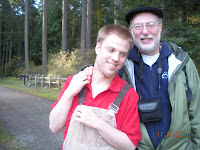 Genesis 12:8. And he (Abraham) moved from there to a mountain in the east of Beth-El, and pitched his tent, having Beth-El on the west, and Hai on the east; and there he built an altar to the Lord, and called upon the name of the Lord.

Genesis 28:﻿10. And Jacob went out from Beersheba, and went toward Haran.
11. And he lighted upon a certain place, and remained there all night, because the sun was set; and he took of the stones of that place, and put them for his pillows, and lay down in that place to sleep. 12. And he dreamed, and behold a ladder set up on the earth, and the top of it reached to heaven; and behold the angels of God ascending and descending on it. 13. And, behold, the Lord stood above it, and said, I am the Lord God of Abraham your father, and the God of Isaac; the land on which you lie, to you will I give it, and to your seed; 14. And your seed shall be as the dust of the earth, and you shall spread abroad to the west, and to the east, and to the north, and to the south; and in you and in your seed shall all the families of the earth be blessed. 15. And, behold, I am with you, and will keep you in all places where you go, and will bring you back to this land; for I will not leave you, until I have done that about which I have spoken to you.
16. And Jacob awoke from his sleep, and he said, Surely the Lord is in this place; and I knew it not. 17. And he was afraid, and said, How awesome is this place! this is no other but the house of God, and this is the gate of heaven. 18. And Jacob rose up early in the morning, and took the stone that he had put for his pillows, and set it up for a pillar, and poured oil upon its top. 19. And he called the name of that place Beth-El; but the name of that city was called Luz at the first.

Midrashic tradition claims that Jacob revisited the place where Abraham pitched his tent, built an altar to the Lord and called on the name of the Lord. In this week's portion Jacob stays in Beth El for the night and sleeps on one of the stones and dreams a momentous dream. He was not aware of God's presence and apparently he was unaware of Abraham's previous act. Sometimes the good that we do reappears later in unforeseen ways. That happened this week to me.

When I was a seventeen in Redlands, California I heard about a "Big Brother" program for teens to mentor younger boys who did not have fathers in their lives. I signed up for the program and was assigned to mentor a 5 year old Hispanic boy in the projects. I saw him every week and played with him and took him on trips with my family and friends. I stayed in touch with him when I went to college, but lost contact after a few years.

My time with William was very important to me because it made me realize many of my ideals and passions in life. I discovered my love of teaching, mentoring, and fathering. My experience with him also had a direct influence on my eventual choice to become a rabbi.

On Wednesday of this week I was in Seattle taking my son, Moriel on a day trip. I had come up to help a family with the funeral of their beloved father/husband. Rob Bernstein died too young at 57. He was a tremendous father and husband. I admired his fathering, especially for his wonderful playfulness with and attention to his children who have grown into fine human beings.

I was doing my own fathering up in Seattle. Everytime I visit I spend a day with my son, who lives in a group home. He is autistic and needs full time attention. I love to be with him and give him my full attention. Here is a picture from our trip to Whidbey island taken by a friend, Mayim Nickerson.


On the way back to Seattle with Mori I noticed an email on my Iphone from a William Garcia. I recognized the name as the 5 year old boy who I mentored as a Big Brother when I was 17. I called him immediately and had a most amazing 1/2 an hour conversation. I learned about his life, his family. He told me the huge impact I had played in his life, providing a father figure at a vulnerable time. I told him how my time with him had inspired me to later become a father and Rabbi. William told me that he had found me on Facebook. There was a 36 year hiatus in our relationship, but thanks to Facebook, we were able to reconnect. Despite my recent critical High Holiday sermon about Facebook, there are amazing ways it can reconcile and reconnect people in ways unimaginable years ago.

As Mori and I got on the Cathlamet Ferry back to Edmonds I sat with him as the sun set over the Olympics in the West and reflected about fathering, being a rabbi, and the beautiful fatherhood of Rob Bernstein. I thanked God for bringing William back into my life and keeping Mori in mine and the hidden and revealed legacies of good fatherhood in the world. I thought about Rob's beautiful legacy. I thought about Yakov returning to Beth El and sleeping in the place where Abraham pitched his tent, made an altar, and called on the name of the Lord. Past good deeds do reappear when you least expect them and remind you where you started.

Posted by Rabbi Dov Gartenberg at 1:01 PM No comments:

Rabbi Dov Gartenberg has served as a pulpit rabbi, Jewish educator, scholar in residence, and innovator of Jewish outreach.

Rabbi Dov Gartenberg grew up in a committed Reform Jewish household in California and was a student of comparative religions at UC Berkeley and Harvard University before training for the rabbinate at the University of Judaism in Los Angeles and the Jewish Theological Seminary in New York (Conservative).

Rabbi Gartenberg first served in Southern California at Adat Ariel in North Hollywood and Mishkan Tephilo in Venice before moving to Seattle. He served with distinction as the Rabbi of Congregation Beth Shalom in Seattle for 16 years. He was the founder and Director of Panim Hadashot-New Faces of Judaism, an innovative iniative in Pacific Northwest for pluralistic Jewish outreach and education.

Rabbi Gartenberg became a Senior Rabbinic Fellow in the Rabbinc Leadership Program of the Shalom Hartman Institute in Jerusalem during the summer of 2007. Shortly after receiving this honor, he returned to Southern California to become Rabbi of Temple Beth Shalom in Long Beach, California where he is combining his unique pulpit experience with his innovations in Jewish outreach and education.